how dumb have we become – just consider plastic water bottles

This is a long standing rant of mine, I have subjected my students to it, as well as any stranger present when some cafe refuses to refill my reusable container. We, the American human species – homo sapiens nonsapiens – thats right, I am declaring us a species beyond the Darwinian evolution because rather than evolving to better survive, we have become a species hell bent on self-destruction.

And there is no better symbol – both in its abstract and physical nature – than the plastic water bottle.

The levels of stupidity involved in the mass production, mass purchase, and mass use of plastic water bottles is so confounding I am not sure where to begin.

WATER IS ALMOST FREE – it comes out of our taps and we use massive quantities of it.

I will not even get into the impending water crisis that we are racing towards, nor the tragedy of peoples who live without clean water. Those macro level problems are all too real, but they do not epitomize our collective stupidity resulting in such collective failure.

I regularly see people leaving Costco, the local Stop & Shop, the Price Savers, the American Basket with carts full of piled up cases of water bottles, wasting their money in these dire economic times. People are spending sacred money on something that is virtually free in our country, as well as then donating more plastic poison to suffocate our planet. What an amazing scam by corporations.

Now I cannot claim to love tap water in this rant. I understand that the levels of fluoride and chlorine in tap water is at times also a scary notion.

If you have made it this far into my rant, here is a peace offering. A story of how I grew up in a consciousness about water.

Each weekend, all four seasons in this New England city, my father and who ever wanted to accompany him would load the back of our silver Peugot station wagon (unfortunately simply a photo from wikipedia not one from my childhood – although I will search one out): 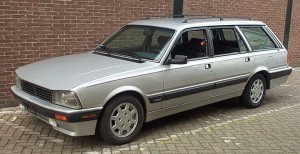 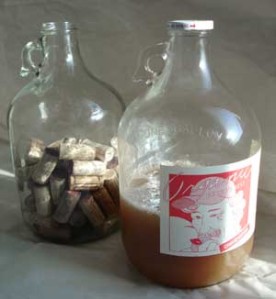 and drive to a nearby monastery; an orthodox one I believe, although we never interacted with the people who lived there. My father would remind us, if myself and a friend came along, to be very quiet and whisper. We did not want to interrupt their prayer or solitude, or sacredness, or maybe we just didn’t want them to catch us stealing their water. Our purpose there was to visit a little alter sitting atop a fresh spring well. We would crouch down and fill each bottle with the freezing water. gurgle gurgle gurgle as the last air bubble filled up. and once we had all the bottles filled, we would drive off, with our liquid gold.

and I can swear that it was the most refreshing, sacred water, perhaps because as we kneeled at that alter, in the sacred silence, we sensed a true amount of gratitude for the water.

I wonder if that sense of gratitude and sacredness could ever be bottled and sold by coca-cola in their Dansanis.

to fail or not to fail, what is your response Cancel reply

writer for page and screen

perhaps a path to collective redemption

Discovering art on the streets of Philadelphia (Est. 2011)

and an increasingly more hopeful life